The Havana is the earliest type of destroyer currently in service with the UCMF, having first seen combat with the Shaltari in 2596. Its design stems from older and largely outmoded naval strategies revolving around the use of torpedoes as primary weapons.

The Vancouver class emerged from the UCMF Naval Design Bureau in the late 2640s in response to the obvious need for more cost effective fighter and bomber support than the well armed Seattle class offered.

The Kiev is an interesting vessel, in that it features a pair of super-heavy UF-9000 series mass drivers in a fixed position. These impressive weapons are heavier gauge than those mounted in almost any other UCMF warship, save the mighty dreadnoughts. The mission role of Kiev class is to hunt and kill the most heavily armoured enemy vessels with swift brutality. They are unsubtle sledgehammers and the bane of enemy flagships. Many an enemy admiral has met their ignominious deaths at the hands of this smaller adversary since its inception in the 2640s.

This set contains 3 UCM Destroyers, all able to be built as either Havanas, Vancouvers, or Kievs! There are parts to build 3 of each Havanas and Vancovers, or 2 Kievs.

The sleek design of the UCM Destroyers uses the typical fins of the UCM and arranges them in three completely distinct ways for three completely different ships! Fast and surprisingly tough, the Destroyers operate as search-and-destroy vessels, or escort carriers. The Havana's Light Torpedoes provide surprising punch, the Vancouver gives a handy (and cheap) launch vessel, and the Kiev is the UCM's Heavy Destroyer, its UF-9000 Twin Mass Driver the bane of even Battleships!

Resin miniatures supplied unpainted and unassembled. This kit will require cleaning and assembly, and could need some small holes filled. Other ships and gaming mats are for scale purposes only. 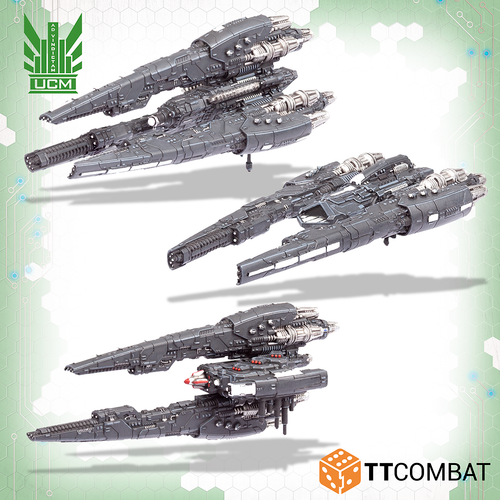